As the Bitcoin block reward-drop ETA date of July 10, 2016 fast approaches, many are excited at the prospects that lie ahead, specifically the projected increase in value.  This is a significant milestone for crypto enthusiasts.  Some miners are concerned that this may devalue the currency as a whole, nevertheless investors, daily traders, and users are excited at an opportunity to see the average price of a Bitcoin ($690 at time of writing) increase as the traditional supply and demand forces are challenged.

Should we be excited or concerned about this event which occurs roughly every four years? When Bitcoin was first launched in 2009, miners were being rewarded 50 Bitcoins for each block they successfully processed.  The first block-halving occurred in 2013 and now, three years later, the rewards will be reduced to a mere 12.5 Bitcoins for a block. Miners are concerned, fairly so, that many ‘businesses’ and partners of the mining industry will be shut down if the value of Bitcoins does not double by the end of the block-halving period. Below is a snapshot of the Bitcoin market price since its inception:

Some of this concern is legitimate, however, that being said, let us not forget that the public Blockchain is a free market.  A free market in which the price of Bitcoin is determined by the laws and forces of natural supply and demand, and by its very nature is free from governmental intervention, central authority control and price-establishing monopoly.  This system contrasts with a regulated market, because once the market reaches a point of equilibrium, the ‘true’ price of Bitcoin will be supported by high competition and continued commercialization of Bitcoin applications.

This is the main reason why investors and traders of Bitcoins are excited – the value of Bitcoin MUST inevitably increase. Miners will hold their hard-earned coins into reserves, and patiently wait until their values are sufficient enough to cover the rising cost of mining (electricity and maintenance fees). The value of Bitcoins has increased sharply since early 2016 and the trend seems to continue – only with growing concerns from traders that one day it will crash.  However, this concern is not substantiated, as in past block reward-halving events have invariably increased the value of a single Bitcoin. For example, Litecoin experienced its first block-reward halving in 2015, and at that time, its price increased over 900% prior to its block halving, which was followed by a ‘dump’ phase that quickly brought its value down to mere $2 – $3 per one Litecoin. What was left out of this dynamic event? Many users of cryptocurrency started labelling Litecoins as just another ‘pump & dump’ coins in which it was highly risky to invest with no clear purpose / objective of the overall project. New potential users of Litecoin avoided its use and thus, it has lost potential capital investment opportunities outside of China.  Now, Litecoins current price is $5.22 which is much higher than it was last year.

If the value of Bitcoin does increase – similar to what occurred in late 2013 and early 2014, there will be more media attention on it, and this could lead to either of results.  Pessimistically speaking, the media attention can quickly turn into negative publicity which will create further Bitcoin market instability leading to a decline in price.  Optimistically speaking, mainstream media attention on Bitcoin can lead to an opportunity for positive public relations.  This positivity can draw in potential consumers of Bitcoin applications and/or potential investors seeking some diversification in their portfolio, and this increase in demand for Bitcoins in circulation can create a virtuous cycle in anticipation of the next block-reward halving.    Below is a snapshot of mining revenue since Bitcoins inception:

In conclusion, are you a pessimist or an optimist at projected 50% drop in Bitcoin block-reward?  Do you think that the transaction fees will increase proportionally to cover for the drop?  Please post a comment and let us know! We would love to hear from you.  You can also e-mail us directly at [email protected], follow us on Twitter, LinkedIn, or Facebook. 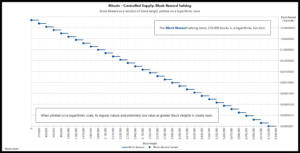 2 thoughts on “What will the effect of Block-Reward Halving be on Bitcoin Price?”